A national awards program that honours both the best Canadian Jewish writers and non-Jewish Canadian authors who deal with Jewish subjects in Fiction, History, Non-Fiction, Young Adult/Children’s literature, and Poetry.

Celebrate the winners of the 2020 Vine Awards for Canadian Jewish Literature in the online Awards Ceremony. Awards will be announced in four categories: Fiction, History, Non-Fiction and Young Adult/Children’s – each with a prize of $10,000 – with winning authors in each category attending.

The Vine Awards for Canadian Jewish Literature is a national awards program that honours both the best Canadian Jewish writers and non-Jewish Canadian authors who deal with Jewish subjects. Each winning author receives a prize of $10,000. The 2020 Jury – comprised of authors Judy Batalion, Allan Levine, and Shani Mootoo – reviewed 55 entries to the Fiction, History, Non-Fiction and Young Adult/Children’s categories.

The Vine Awards for Canadian Jewish Literature are made possible by a generous donation by the Lillian and Norman Glowinsky Family Foundation.

David Bezmozgis, Immigrant City (HarperCollins Publishers Ltd)
In Immigrant City David Bezmozgis masterfully elucidates the possibilities of the short story form. One can see and hear the cadence of the voices of his vulnerable characters, their quotidian trials and unexpected triumphs wrought keenly palpable by the author’s humanism and perfectly weighted hand. – Vine Awards Jury

Sarah Leavitt, Agnes, Murderess (Freehand Books)
Sarah Leavitt delivers a most powerful story, artfully tying together the engaging voice of her protagonist with well-timed ellipses and magical drawings that are the hallmark of the successful graphic novel. – Vine Awards Jury

David Szalay, Turbulence (McClelland & Stewart)
Turbulence takes readers on a seat-gripping journey of desire, loss, and the unexpected ways in which we touch each others’ lives. – Vine Awards Jury

Zelda Abramson & John Lynch, The Montreal Shtetl: Making Home After the Holocaust (Between the Lines)
The Montreal Shtetl is a well-researched and engaging narrative about identity and belonging in a not-always-pretty period in Canadian Jewish history. – Vine Awards Jury

Matti Friedman, Spies of No Country (Signal, McClelland & Stewart)
Spies of No Country reads like a spy-thriller page-turner, replete with all the suspense of double identities and the close calls of betrayals–except that this is not a work of fiction. Well researched, and offering up much intriguing and gritty detail, it is the unveiling of several intricately-woven true stories of the earliest days of Mossad, and the pivotal, but until now obscured, role of the four Arab Jews who laid the underground work for the imminent birth of the country of Israel. – Vine Awards Jury

Heidi J.S. Tworek, News from Germany: The Competition to Control World Communications, 1900-1945 (Harvard University Press)
Heidi Tworek has produced a well-researched, accessible and thought-provoking study of the power of information and how it was manipulated by both the Weimar Republic and the Nazi regime. The book’s significant lessons resonate with current battles over “fake news” and the role of the media in a democracy. – Vine Awards Jury

Naomi K. Lewis, Tiny Lights for Travellers (University of Alberta Press)
In this memoir, Lewis appears to be on a quest to retrace the actual route of her beloved Opa’s escape from German Controlled Europe, but along the way, traveling alone from Amsterdam to Lyon, unexpected family secrets are unearthed. In the best tradition of the memoir form, Lewis’s explorations take her well beyond her expectations, and she finds that her initial quest is a small part of a much larger understanding of herself and her Jewishness. – Vine Awards Jury

Diana Wichtel, Driving to Treblinka (Heritage House Publishing)
A compelling, vivid and honest memoir and narrative about Diana Wichtel’s heartfelt search for the truth about her troubled father, a Holocaust survivor, who she lost touch with as a young teenager, and her journey to discover the harrowing details of his wartime experiences and the hardships he experienced in the years that followed in Canada. – Vine Awards Jury

Kathy Kacer, Masters of Silence (Annick Press)
Kathy Kacer has written a superb well-researched, fast-paced wartime story, a narrative that relates the traumatic struggles and courage of her young protagonists, siblings Henry and Helen, and their relationship with the real-life Marcel Marceau, the mime artist, who though still in his early twenties, was active in the French Resistance. – Vine Awards Jury

Edeet Ravel, A Boy is Not a Bird (Groundwood Books)
Edeet Ravel has created a gripping story, based on a true one, of a young boy’s initial excitement, his ensuing confusion and dawning understanding of the politics of the 1940s when his Eastern European hometown is invaded by Russia. Ravel masterfully and in clear prose lays out her protagonist’s trajectory from happy-go-lucky child to one who comes to understand the value of “holding onto one another when everything else slips away”. – Vine Awards Jury

The Vine Awards for Canadian Jewish Literature are made possible by a generous donation by the Lillian and Norman Glowinsky Family Foundation to support Canadian Jewish literature, a tradition they established with the original awards in 2004, building on the Canadian Jewish Book Awards founded in 1988 by Adam Fuerstenberg. The Vine Awards are a loving tribute to Lillian’s parents – Helen and Stan Vine – who were passionate about the arts and the Jewish community throughout their lives.

Koffler Centre of the Arts

Koffler Centre of the Arts 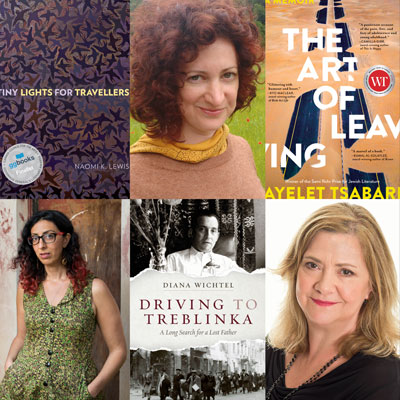