Alix Sobler is the playwright behind The Great Divide, on stage until May 15, 2022 with the Harold Green Jewish Theatre Company. She is also the winner of the 2015 Canadian Jewish Playwriting Competition. The Great Divide provides an insight into the immigrant and refugee experience of the early 20th Century, and those who paid the ultimate price for seeking opportunity and a new life across the ocean. We caught up with Alix to learn more about the inspiration behind her writing, the parallels between the triangle shirtwaist fire of 1911 and a post-pandemic world, and hosting Passover for the first time in her new home.

Kultura Collective: Hi Alix. Can you tell us a bit about you, and your work as a playwright and performer?

Alix Sobler: I grew up in the New York suburbs, in an idyllic, warm home and loving family. I was involved in children’s theater from a very young age, and I always loved to write. As I got older, I began to bring these two artforms together. In college I was a theater major, and after school I worked as a solo performer, writing and performing my own solo shows, primarily on the Canadian Fringe Theatre Festival circuit (two time full tour lottery winner!) It was an amazing way to hone my writing skills, find my voice, and see an incredible amount of cheap, cutting-edge theater. I also met my future husband on my first tour! I ended up moving to Winnipeg for love, and after nearly a decade in Canada, we moved back to NY so I could get my MFA in playwriting at Columbia. These days I am mostly focused on my writing, but I do occasionally get on stage when the moment calls for it.

KC: We are looking forward to getting back into the theatre to see The Great Divide, which you wrote. Can you tell us a bit about the show? What can audience members expect?

AS: The play is a rumination on the nature of storytelling and who gets to write the history we learn. It has only five actors, but I think the play, and especially this production, is very evocative of a whole world. The play is at times whimsical, funny, and sweet, and other times didactic, serious, and dramatic. It is based in history, but at the same time very theatrical. I hope it will leave audiences thinking about issues of labour history and current labour discussions, and maybe give them a new perspective on something they already have formed opinions about.

KC: What inspired you to write a play about the triangle shirtwaist fire of 1911?

AS: I went to the Tenement Museum a few years ago (a wonderful museum in New York) and I was reminded of the story of The Triangle Shirtwaist Factory fire. I had recently been hearing about unsafe working conditions in factories in China and other spots abroad, and the debate over minimum wage was (as always) raging in the states. As I read more about the Uprising of the 20,000 (the strike that preceded the fire) and the challenges the workers faced at the time, I realized that there is so much from that moment in history that is still relevant today. It is also a page out of my personal history. While my grandparents are younger than the characters in the play, they arrived in America as part of the same wave of immigration, and many of the details of their stories are the same. Until 2001, this was the largest workplace disaster in American history.

KC: This play was previously staged in Winnipeg, New York, and London. What will be new in the Toronto production?

AS: Every time you involve new artists, new aspects of the play are realized. I have continued to make changes to the script, but more than that, Avery’s (the director) vision and the interpretation of the actors and designers have made this production singular and new.

There is also the element of time. I think the audience perspective will be different having lived through the pandemic and all the recent turmoil in the world. That has nothing to do with this production in particular, but the new shadows cast on the play simply by virtue of being performed right now will definitely have an effect on the audience experience.

KC: The Great Divide was originally scheduled for spring 2020 but was delayed until now. Does the play feel different now, in a post-pandemic world?

AS: I think the pandemic made us all look at “essential workers” and the notion of a hands-on workforce differently. Whether it was the hardworking transit workers, delivery people, food preparers, teachers or one of many other groups, the pandemic really shined a light on how so many people are taken for granted in our society. The Triangle Shirtwaist Factory fire happened in a moment of huge upheaval in America, and I think this moment in history is similar. Everyone is questioning the system we have in place, who it is set up for, why the rich continue to get richer when the people at the bottom suffer, and why it might require sacrifice and protest to change things.

KC: Speaking of the pandemic, how did it affect your practice? What was the effect on the theatre industry?

AS: With the possible exception of tourism and hospitality, I don’t know if there was any other industry as negatively effected by the pandemic as theatre. The entire artform is based on our ability to congregate. I think we all did our best to use Zoom and other technologies to try to recreate the feeling we get in the theatre, and it served us well, but there is no substitute for being together. Personally, I was very fortunate to have other kinds of work and writing to do. I work in the audio space as well, and spent the pandemic writing a podcast, doing some ghostwriting, and researching and writing new projects. I had several productions and workshops cancelled or postponed, and that is always a bummer, but compared to many other artists I was really lucky, and so I can’t complain.

KC: You won the 2015 Canadian Jewish Playwriting Competition for The Great Divide. Can you tell us a bit about the program and what it meant to you to win this prestigious award?

AS: That was such a huge honour for me and the play. I was in graduate school at the time, and though that was an important and valuable experience, I was also feeling very disconnected from my professional life and what it means to have a play out in the actual world, not just hypothetical in the classroom. Getting the call that The Great Divide had won the award reminded me that the work I do is about reaching other people and sharing stories that are important to me. With the award came cash, and a reading of the play, and of course, some bragging rights to boot! It was a wonderful experience and I think it has really opened up some doors for me and the play.

KC: What makes theatre your medium of choice for storytelling? Why is it a great way to tell Jewish stories?

AS: Theatre is one of our oldest forms of storytelling, and there is no substitute for being in a shared space with other human beings (I think we have all learned that the hard way!) I love being on a shared journey with a group of people, watching a transformation happen in real time, and knowing that even though a play is rehearsed and set, it is still a little different with every performance. Like the Jews, theatre is adaptable. A play can be a lavish, star-studded production, but it can also emerge from a single suitcase in the basement of a building, with just a few people gathered around to watch. And like Judaism, so much of the experience is wrapped up in the ritual. I like the tradition in both theatre and Judaism of telling the same stories over and over again, seeing what resonates in different ways at different times, learning and revisiting the past in order to prepare for our future.

KC: What else are you working on right now? Do you have any other plays on stage soon?

AS: I have a lot of projects on the go right now! My next official production is scheduled for 2023, but you never know what will crop up between now and then. I am writing a new play and rewriting a couple of others. I am also working on a new podcast, and some ideas for television. I am very excited to be working on my first musical, for which I am writing the book along with two very talented collaborators.

AS: I recently moved into an apartment that I bought, and being in a permanent home like this has really inspired me to host and cook! I hosted Passover for the first time here, and I made my first brisket, tzimmes, and kugel, and I have perfected my personal matzah ball soup recipe. I think being in my own space got me thinking about the holidays my mother used to host and how warm and exciting those experiences were growing up. I have really enjoyed learning how to make some of these traditional Jewish foods. I also put together my own Haggadah! Sourced from the traditional book and some newer, more progressive versions, and my own take on Passover (which is my favorite holiday) and assembled a haggadah that really looks into the angles of the seder I love the most.

KC: If you could have Shabbat dinner with anyone (Jewish), who would it be and why?

AS: Alive or dead? Ruth Bader Ginsburg. I would love to ask her questions about her life and career and feminism.

Alix Sobler is writer and performer from New York. Her plays have won or been finalists for multiple awards including the Alliance/Kendeda National Graduate Playwriting Competition, the Canadian Jewish Playwriting Competition, the O’Neill National Playwrights Conference, and the Jane Chambers Award, among others. She has had work read and produced at theaters around the world, including The Coronet Theatre (London, UK), Roundabout Theater Company (New York, NY), South Coast Repertory (Costa Mesa, CA), The Alliance Theater (Atlanta, GA), The Kennedy Center (Washington, D.C.), The Segal Centre (Montreal, QC), The Stratford Festival (Stratford, ON), and many more. She has written five solo shows which she has performed throughout North America. She has degrees from Brown University, and Columbia University. Learn more at alixsobler.com

The Great Divide: On Saturday, March 25, 1911, at 4:45pm, a fire broke out on the 8th floor of the Triangle Shirtwaist Factory on the lower east side of Manhattan. Within ten minutes, 146 workers, most of them young women, most of them recent immigrants, lay dead, either on the floor of the sweatshop, or on the street eight stories below. The Great Divide provides an insight into the immigrant and refugee experience of the early 20th Century, and those who paid the ultimate price for seeking opportunity and a new life across the ocean.

The Great Divide is on view at the Greenwin Theatre at the Meridian Arts Centre in Toronto from April 30 to May 15. For tickets and information please visit hgjewishtheatre.com. Ashkenaz is looking for a Marketing & Communications Coordinator

The MCC will play a central role in the overall communications, promotion, and marketing efforts of the Ashkenaz Foundation relating to its programming, brand, and public-facing image.
Read More 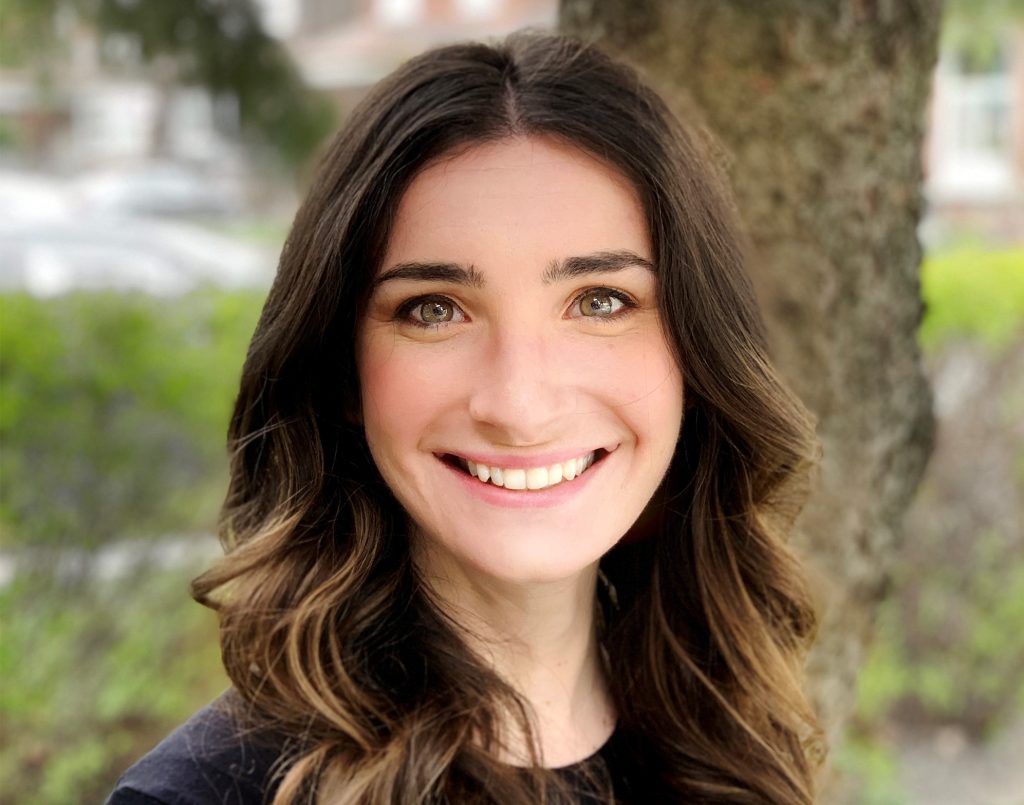 Miriam Borden is a doctoral student in Yiddish Studies and very active as a speaker, teacher and researcher in the field.
Read More

Hosted by Avery Saltzman and David Eisner, creative directors of the theatre, this podcast explores the culture, art, and heritage that is being Jewish.
Read More